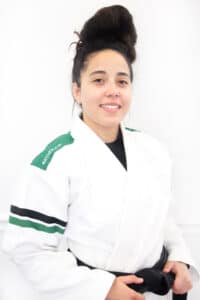 Victoria Tome is from Brasília, Brazil. She started training Brazillian Jiu Jitsu in 2003 when she was 6 years old. Victoria started competing as a pro athlete at the age of 11. Since then Victoria has been regularly competing in major tournaments.

Victoria started coaching at her school in Brazil when was 15 years old. She believes that by teaching she can improve her own skills and she also loves to teach and see the power and positive impact of Jiu Jitsu on people’s lives.

As a child, Jiu-jitsu taught her a lot about focus and responsibility which she believes was critical as a child.

Now as a mother, she has the privilege to see the power of Jiu Jitsu through her son’s life. Jiu Jitsu has improved his focus and coordination.